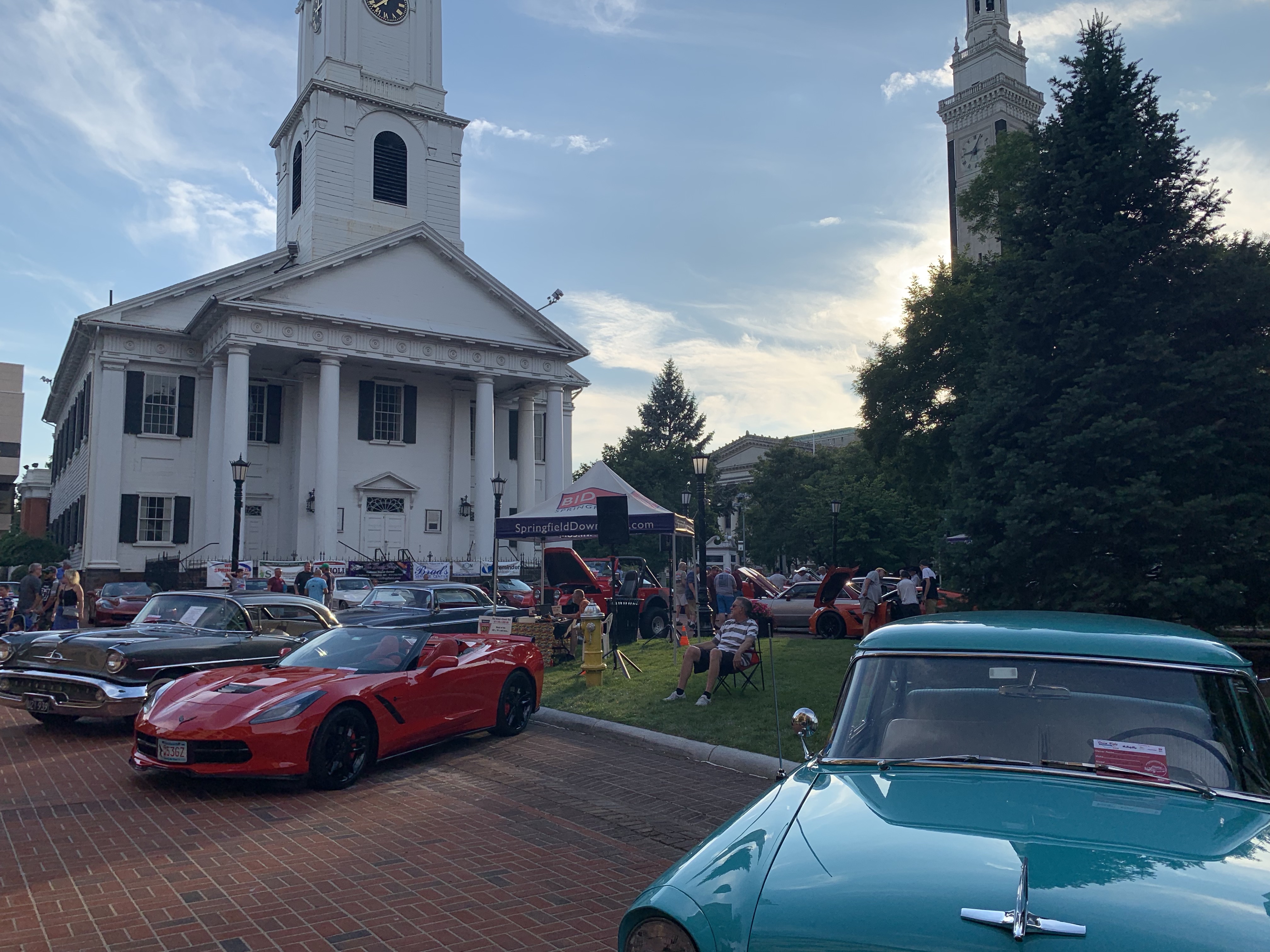 Springfield hasn’t changed much since I first visited with my family in 1976. That was our first visit to the U.S., coming over on an extended summer vacation from the island nation of Singapore.

The stylish Worthy Hotel, built in 1895 as Springfield’s finest tourist house, is still there as an apartment, but still just as majestic. And the city, founded in 1636, played a pivotal role in the American Revolution.

I visited again when I attended Surface Warfare Officer School in Newport, Rhode Island in the winter of 1993. I went to see my ole Singapore friends, Peggy, Paul and David. It was one of the coldest days that year with a cold spell so severe, it brought Springfield to its knees.

26 years later it was good to return with warmer weather during the middle of summer.

From the outset Springfield hasn’t altered one bit It still has its unimpressive skyline due to an antiquated state law limiting the city’s building height to 125′, which remained in effect until the 70’s.

But once you head downtown, you’ll notice much has changed right away. First Springfield is just as safe and family-friendly as it was when I first came here as a kid. Back then Court Square was a popular meeting place for people all around town to converge and socialize.

I stumbled upon Cruise Night at Court Square where classic car owners from all over New England converge to showcase their wheels. There was a wide variety of classics from old Fords to Corvettes. There were burgers and dogs and classic hits blasted from 97.7.

It was refreshing to see a badass 500+ HP supercharged engine on a muscle car rather than my low power (350 hp) /high torque 13-liter Maxxforce that I had to deal with day in and day out.

Yes, semi truck engines are a completely different beast. And they are designed to run a million miles, stopping only for maintenance and when the driver has shut down for the night.

With today’s higher fuel prices, the 13-liter engine has become the engine of choice due to weight reduction and fuel economy.

And what has changed in this unpretentious, Victorian New England town is a multi-million dollar Las Vegas-style casino.

The MGM Springfield opened in 2018 to much hope and fanfare.

First, I went next door to the legendary Red Rose known for decades to serve the best Italian pizza north of NYC. When MGM started their plans to come to Springfield, there was talks in buying out Red Rose’s property. But owner Tony Caputo had no interest in leaving the business his parents started in 1958.

And since opening, business has been booming for Caputo. They’ve been busy literally from the minute they open the doors, and often there’s up to a two hour wait.

Now Red Rose is building a 2,000 square feet kitchen where you can stand on the street and watch their seasoned chefs toss dough up in the air then bake them in their wood fired brick ovens. The pies are loaded with their signature red sauce and thick toppings. Their temperatures are so piping hot, the pies are sizzling within minutes.

Since, I couldn’t wait , I decided to check out what MGM had to offer in their gargantuan food hall. I strolled inside the South End Market to see a wide variety of food ranging from Asian Noodles to New England seafood.

I appreciated the fancy food hall feel with a mix of local artisan restaurants and felt that many people here weren’t actually gamblers but drawn by the food.

When I first approached the casino floor, I noticed nobody was checking for I.D. There were a lot of roulette tables and plenty of people getting excited over a marble and a wheel.

There were a handful of people dressed casually in tees, shorts and sandals working the slots with all the bells and whistles to keep them engaged and playing.

Springfield didn’t feel stuffy like some other MGM casinos such as National Harbor just outside of D.C. It was more working class here and less opulence.

One major difference was the $25 minimums compared to $100 in Oxon Hill. Many people could easily spend $25 for dinner but it would take dinner and drinks for two to reach $100.

The other difference is the prevalence of Spanish 21 which are 48 card decks without the Tens.

I also heard that from 6-9am, the minimums were only $5 – which became a great incentive to stick around for the entire night and gamble while most people are getting up for work.

I found a spot behind a boisterous crowd playing Blackjack. There were a couple of friends and other strangers converged around the table that they had just met. Either way, there was light conversation which made Blackjack quite a social game.

I was cheering on some newbies and applauded when they actually beat the House. On the other side of the table, I was watching the guy lose hand after hand. Every hand he would go into a large hissy fit and complain about how unfair it was.

At another table a couple of guys dressed casually, one clean shaven another wear a scruffy beard playing the $25 minimum tables. They tried their best to fit in and not look too suspicious. But they tended to change the amount of their bet depending on the count.

Blackjack has the best odds in gambling and very little skill is required. Beginners stand the same chance of winning as experts. They just have to know a few basic rules and adopt a good strategy to beat the House.

And if someone is constantly doing that, it is a sure sign that that player is counting. Casinos are really cracking down on card counters. Dealers and pit bosses look for these extreme betting swings and then politely ask them to leave. If they enjoy too much success, they can be banned from the casino and facial recognition will prevent them from returning.

When the clock struck midnight, I downed my last Tsing Tao and headed out the door to the warm summer night. It was an easy five blocks to my truck where I immediately crawled into my rack and rested peacefully until 7 when the morning commuters started rolling into town.

It would be an easy drive and I had a long time to get to New Jersey. It would be a good day, or so I thought. I was hoping for the best, but planning for another hectic day in trucking.