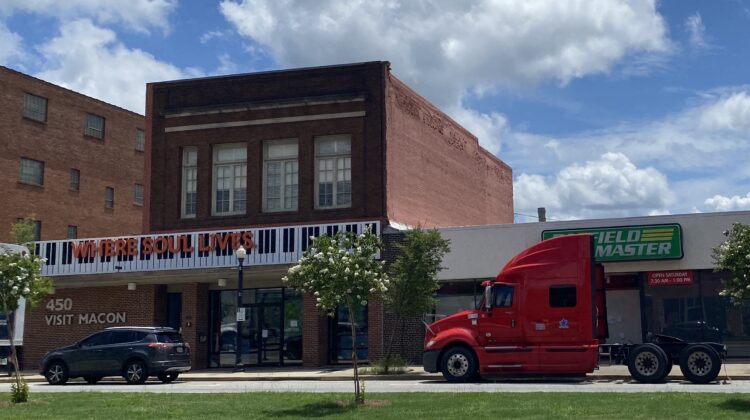 I left Atlanta towards Darien and decided to check out a middle Georgia city I have never visited. I parked in front of the Welcome Center and was greeted by Curtis who gave me an amazing narrative history of this city.

“Welcome to Where Soul Lives,” greeted Curtis. “We were ranked the No. 2 music city by Fodor’s.”

Founded in 1823 on the banks of the Ocmulgee River, Macon is a city where soul lives. James Brown recorded his first single here. The Allman Brothers laid roots here and lived in The Big House which is now a museum. They headlined a benefit concert for Governor Jimmy Carter in Rhode Island lighting the spark for his long shot presidential election.

Little Richard, the singer behind “Tutti Frutti,” “Good Golly Miss Molly,” and “Long Tall Sally” was a native of Macon. So was Ottis Redding who released his #1 hit “Sitting on the Dock of the Bay” three weeks after he died in a plane crash on the way to a show. Today a statue memorializing his life and contributions sit at the Otis Redding Park across the Ocmulgee River.

If you like sports, the GA Sports Hall of Fame is here. So is Luther Williams Field, the second longest operating baseball field (after Wriggly Field). Hall of Famers and All Stars such as Pete Rose, Chipper Jones and Andruw Jones played here for the Macon Peach.

After getting an extensive tour, I was ready to hit the streets and see for myself what this underrated music city has to offer.

I first started at the Per Diem Market, a Gent store that specializes in “Plants, Provisions and Pets.” The store is quite large with a small deli upstairs. I grabbed a Kumbacha juice and an Apple Summer salad. The delightful salad came with kale and red cabbage, gala apples, feta cheese and pecans. Amy Bell started Per Diem last July, during the peak of the pandemic, and although supply lines were slow, things are now picking up.

Next I followed my nose to Ricky’s Taco shop to grab an Al Pastor taco and street corn. Everything was on point with large portions and tasty ingredients. The sauce was great and the staff were gracious. The street taco washed down well with a mango Jarisco and I was ready to proceed down Cherry St.

Next I stopped at Piedmont Brewery to grab a beer. i could tell right away that the venue used to be an old 5 and dime store. There was a lot of African American art on the wall and lots of good ole Southern charm from the staff.

The handcrafted raspberry seltzer was refreshing and tart, perfect for a hot day. Loved the vibe and it appeared that everyone around me in the dining room and bar were enjoying their food and drinks.

Finally, I was ready to sit down, grab a cup of joe and start blogging about my experience today. I stopped at Taste and See, a contemporary coffeeshop and art gallery.

I ordered a tailor-made cup of latte paired with a cinnamon roll, then I sat down by the stone fire place which was perfect to rest my weary body and refresh my creative mind. Parking is free after 8, but I couldn’t stay. I just booked a port load from Savannah, so I still had a couple of hours of driving ahead.

Macon is definitely a fun, historic city “Where Soul Lives,” and I look forward to paying a visit again.