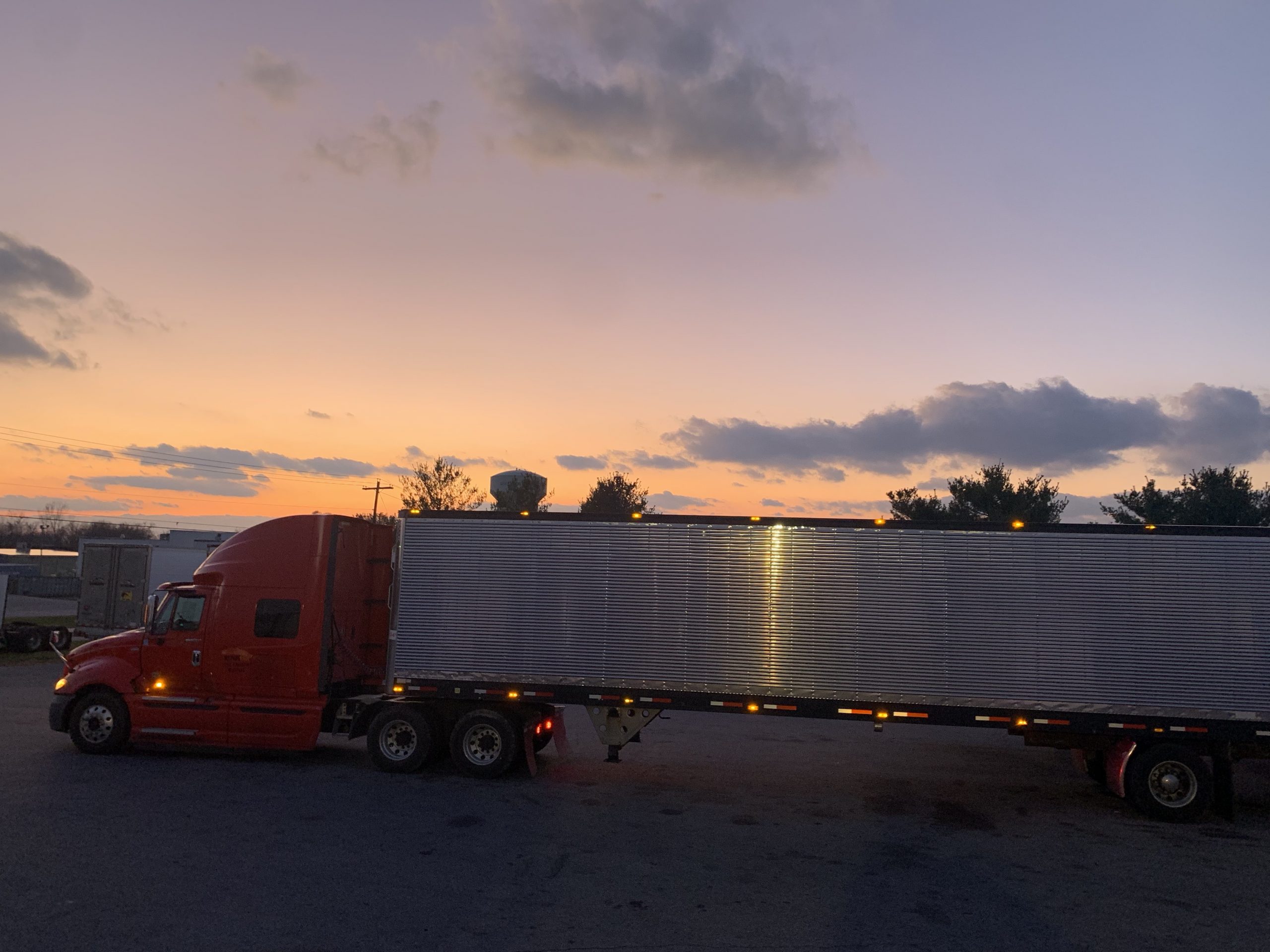 “Hey we need you to recover a trailer in PA,” said the CH Robinson broker. Driver blew a head gasket and this load needs to get to Boston by Thanksgiving.”

I could sense the desperation in his voice.

I was heading to Richmond with the tow-away from San Antonio, so making a course change to PA was doable. I wasn’t planning to go to Boston, especially before Thanksgiving, but i was always up for helping out a trucker in need. Heck, we’ve all had break downs. It was good Karma.

Luckily, I was able to stop in DC for a day to check on my tenants and to pick up mail. Then an easy drive up 270 to Greencastle, PA.

The trailer was parked all the way back by the line of trees. There were multiple trailers and it was critical I found the right one. Wouldn’t want to drive 500 miles to Boston to find out I arrived with something that was due in Texas.

It was bright, shiny stainless steel with lots of marker lights. I could tell that it used to be a reefer since the spot where the unit was located was now covered by a piece of aluminum.

I kicked the tires and felt the bounce. When I opened the doors, the stench hit me like a ton of bricks. It wasn’t your typical load of water, detergent , can food or mixed goods. What I found instead were pallets of animal hide, of all shapes and sizes, stacked five feet high. There was no telling how many dead animals were in there, but there was easily hundreds if not thousands.

And by the looks of it, it wasn’t just cattle. There was probably pigs, goat, sheep or maybe even alligator or deer.

I gagged in disgust. I had signed up for this load, and I’m not the type of guy to fall off just because I didn’t like what was inside the trailer, though the thought crossed my mind.

At least the trailer was all lit up and bright. I reluctantly drove the heavy load on 81 towards Boston. Since I left in the evening, I knew it would be a challenge finding parking. It was only Sunday – hopefully, it wouldn’t be that busy.

Boy was I wrong. 200 miles later in this Pilot east of Allentown, a faint knock on my door. It was the Truck Stop attendant.

They wanted me to leave. I was parking in a reserved spot. I could see the anger glare at a driver ready to pull in to his spot. This happened again at the TA next door, except I was in the way of trucks coming out of the repair shop. And 50 miles later I tried my luck in a rest stop, to no avail.

So after three failed attempts, I was determined to find a Home Depot or Walmart.

Google told me to take state road 10 of 287 towards Whippany. I was happy to find the Home Depot parking lot in East Hanover NJ. And for a chance, no-one bothered me for the rest of the night – even though I struggled with a bout of insomnia.

There are many Asian enclaves in Jersey and Hanover happened to be one of them. When I woke up, I was happy to spot an Asian grocery store, Kam Man Market. Had an early lunch there to include steamy hot Char Siu Bao, soft and moist with delicious BBQ pork in the center.

Then the uneventful, easy 4 hour drive over the Tappan Z Bridge to Boston. When you’re driving north to New England, take the newly-rebuilt Tappan Zee over the GW Bridge – you’ll save a lot in toll going this way. New Yorkers really love the late Gov Mario Cuomo, even though he was defeated after his third term by George Pataki.

The drive was tricky since I had to drive on I-90 towards Logan over to the Chelsea seaport.

When I arrived, I was shocked and disgusted to see a dirty warehouse stacked with animal hide. The stench of hide and salt was overbearing.

“We’ve been here for years and getting ready to move. And we’ve been preserving hides like this for hundreds of years – salting, drying, freezing – it’s fairly low tech,” said Don, the manager at Boston Hide.

“Where do they go from here? I knew Boston had a famous Leather District known world-wide for its production and selection of designer leather clothing and handbags. After all, I used to own a Boston Harbour lambskin leather jacket.

“We’re shipping all the hide overseas to Asia, This shipment will be converted to leather upholstery in your car, handbags, jackets, shoes, what not.”

“So how animals were in my load?”

“Oh, easily thousands. There’s not a piece of the cow we don’t use.”

But before I could drop off the trailer and the disgusting load of animal hide, I had to execute a number of tricky backing maneuvers that would challenge even the hardiest veteran drivers. I had to back down a busy street with a yard assistant stopping traffic on both sides, so I could do two back-to-back 90 degree alley docks into the warehouse dock.

That was a lot to ask for, and I almost gave up. But I wanted once and for all to get rid of this heavy load of dead, rotting animals, even if it meant doing a dozen back flips, this load had to go.

So though beef is very popular in the US, the use of hide to make leather jackets and seating has diminished. Popularity has gone down throughout the world and consumers are now supporting vegan clothing.