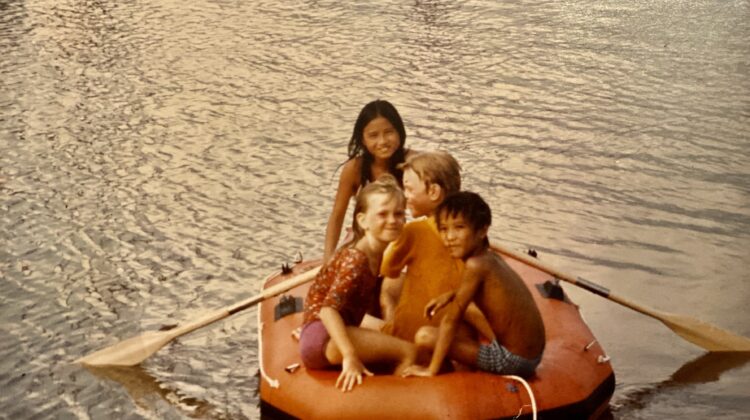 Traveling is in my blood.  When I was four my mother, with my sister and I in tow, escaped the evil grips of my biological father.  I remember vividly the night my mother woke me and my sister up as if our lives were suddenly on the brink and our future on the balance. Our bags were already packed and we sneaked out of the flat that was the venue for vilification over the last several years.  My father was somewhere in the underbelly of the Chungking Mansion getting high on opiates, unbeknownst to our clever plan to escape.

For the first time, I had got to know an American, who became my father, and we pulled anchor at the wink of dawn. Our first destination to be followed by a string of exotic destinations was Manilla and this is the city where I thrilled the shores and chased the gulls and was graciously presented a name by the local filipinos that stuck with me till this very day — “Chito” meaning “the free one.”

After sailing extensively throughout Southeast Asia to the likes of Indonesia, Thailand and Malaysia and to the most remote reaches and beaches in the Sulu Sea, we finally set anchor in the port that would become our home for five years — the Lion City of Singapore.

Then when I was 12-years old and spoiled by unstructured, unschooled lifestyle, my family decided we had reached our critical juncture in life–we shipped our yacht and purchased a one-way ticket to the US, reaching new shores, new hopes abound.

But we were sad to let go — we loved this city, the food, the friends, the culture — every single and social bit of it. And we were sad, outrightly downtrodden, when we had to reluctantly wave goodbye.

However, we rested our weary and travel-ached bones in a quaint, backyard town of Darien, population 1,500, where we learned to live slow and enjoy the Golden Isles sunset along the saltwater marsh and we promised never to sail the high seas again.

We loved our country and my mother, my sister and I became proud, naturalized citizens and upon graduation from high school, I decided to break our family promise of dismissing the seas so that I could give something back to the country that gave me great hope.

My first duty station after boot camp in frigid Great Lakes, Michigan was initial training school in Dam Neck, Virginia Beach to become a radar operator aboard the fast frigate, USS Francis Hammond (FF-1067) stationed in Yokosuka Japan. It was a small ship of barely over 200 and we were one, tight family who embraced our new culture and country with respect and admiration.

This duty station was also the most family-oriented — a chance to get to know my mother’s family who resided in Kobe, Japan. They had not gotten to spend much time with my mother since she left Kobe to Hong Kong in the early 1960s to be with this charming, seductive man who would become my father.

And it was from an opportune port visit in December 1986 in Hong Kong that I got to visit my father for the very first time since I was four. We embraced as if we had not seen each other for eons. We talked as if it was our very first time to hold a conversation. We sobbed and sobbed, and he asked me about the night we slipped off never to be seen or heard again for an eternity.

It was a tear-jerker and too emotional for the likes of a budding, 18-year old Sailor who wanted to spread out and stretch his wings. We said our hurried good-byes as the ship was preparing to weigh anchor hoping to unite again, and not having to wait another 14 years to do so, but knowing deep inside that the days were numbered and there would be more port visits in other distant lands between here and now.

I did return to Hong Kong later, much later in my career, when I was already a commissioned officer, this time aboard a sprawling aircraft carrier (USS John C. Stennis), but it didn’t matter much anymore — my father died just a couple of years after I visited him. Diabetes got the best of him, and he died a lonely, depressed man.  I always pondered whether he had waited for this time to cherish memories and to bury the past before he had to go — his soft, tender ashes scattered like wildflower seeds somewhere along the South China Sea and my memories clung on distant and long hoping never to fade.

After I retired from the Navy, I attended George Washington University in Washington, DC to earn my MBA. I left with a diploma, and also with a food tech startup called RUNINOut. Our goal was to add diverse restaurants, stores and attractions to the site and after running it for five years, I had oversaturated the local DC market.  As part of a marketing campaign, we hosted meetups.   But hosting events was too time consuming with little return on investment. So It was time to take RUNINOut on the road.

What better way to do that than to become a truck driver and make some money on the side. I worked for three trucking companies before I decided to spread my wings. I cherished the freedom to visit the places I yearned to see, and return to DC to take care of matters at home whenever needed.

When I was a company driver,  I was issued International trucks which are notorious for breaking down.  Nevertheless, I got accustomed to driving these semis, stopping frequently at the most inopportune time to blow out the soot buildup in the emissions system.

I realized then that I might be able to acquire one of these trucks for a song and a dance, perhaps as much as 1/3rd the price of a similar truck that had not gone through the same fate.

I attended diesel tech school in Baltimore so I could better maintain my truck.  Hopefully my Prostar would hold up and would not break down that frequently.  If so, I may have to implement some of my recently-acquired mechanic skills to keep her running.

Insurance, taxes and registration were exorbitant, so to offset the cost, I had to keep rolling, booking loads as long as 1500 miles away.

Trucking in a semi truck is living the good life. No boring meetings, No pesky bosses to haggle you. And when I get tired of the scenery, I just get up and go. Every place I visited, I made a point to check out the sights including visiting local restaurants and bars, especially Mom & Pop’s and places off the beaten path.

And if I can’t decide where to go next, I just get on Truckers Edge and find a load somewhere – hopefully someplace warm, that has a beach, someplace new, or someplace where I yearned to re-explore.

The loads normally have a tight schedule but many times, I would transfer new or used trailers from the yard to the customer, and I was allowed to set my own ETA. When this was the case, I would map out my route to do some sightseeing, to visit places and to meet people along the way.

And when I delivered my trailer, I was now free to go wherever I want and park almost in any open spot that could fit a 30’ truck.  Driving bobtail, I could fit in almost any parking lot under 13’6″ high , including beaches, parks, strip malls and all over the town.

But RV’ing in a truck also came with the perils of trucking. Accidents, incidents, break downs, distractions and of course the pesky emissions issues that kept on reappearing.  I’ve been traveling all my life, so I’m used to obstacles and setbacks.

Would life in a bobtail be rewarding. Or would I be facing hazards and dangers in the road ahead?

Benihana
Prayers for Nepal
The Walls Came Tumbling Down