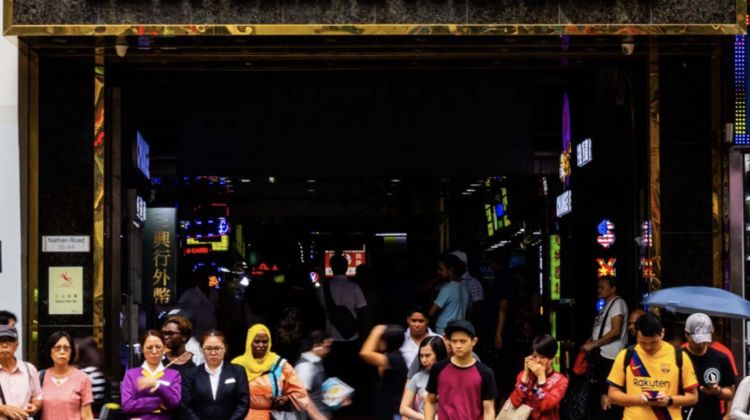 A double decker bus, obtuse and flimsy, jerked to a panicked halt in front of an evolving high-rise that towered over Tsim Sha Tsui like an emperor cast in bronze.

A dozen Hong Kongers poured out carrying large bags of something fresh and smelly.  A South Asian man, lean and pugnacious, carried goat and herb spices to prepare a meal that evoked memories from distant shores.  A young mother clasped her little girl and boy on each hand tightly as if danger lurked around the corner, whether a burglar or something more sinister.

They had gone shopping before the mass exodus of office workers overwhelmed the flea markets. They haggled for Cheung fun, bok choy and bitter melon from the wet market on Hong Kong side — past the hustle and bustle of Nathan Street where the veggies were ripe, and the snappers were still squirming in tanks. For less than $100 HK dollars you could load up on groceries for the entire week. And if you ran out, you could always call one of the several dozen vendors on the first floor who were happy to deliver steaming hot food to your door.

Like a bustling grand central, the entrance was always busy with people of all race and culture coming and going in a wild melee.

From the beginning, the building was designed for private residences. But to accommodate the influx of jet-setting Westerners, the second floor transformed into a shopping mall catering to tourists and the basement was a hub for night clubs, cinemas and restaurants. If you wanted to buy cheap watches, you may dare to venture here. If you wanted the best exchange rate, Chung King was a stop for backpackers on a shoestring budget.

There was a long line for the elevators – all ten of them. You never ride the elevators alone and you never ride it if the other person was a strange man. But we must also never take the stairs.  Remember what happened the last time we took the stairs.   When the little girl, just seven and her younger brother just four, were walking back from the park.

They opened the doors to the stairwell and climbed about one flight of steps when suddenly a Chinese teenager wielding a knife appeared and demanded that they follow him.

Suddenly instinct took over.  The kind of instinct that surfaces when life hangs on a precipice.

“I need to get my doll – my favorite doll, then we will follow you,” she insisted.

The teenager got very agitated, and insisted they leave now.

Within a few minutes, a man entered the stairwell and started climbing the steps.

“Daddy, daddy,” the little girl cried, pretending that this strange man was their father.

The kidnapper quickly left and the two kids ran as fast as they could upstairs to the 5th floor where they lived. They had escaped what was surely a potential abduction and child trafficking.

The little girl was completely out-of-breath from running and then pounded and screamed at the door of their apartment until someone opened the door.

So no matter how long the wait for the elevator is, you never take the stairs or else you risk rubbing shoulders with a drug dealer or kidnapper.

When they made it to the flat, they had to prepare dinner.  A couple of backpackers would be checking in that night. The Mansions became a magnet not only for tourists on a budget but also refugees fleeing war-torn Vietnam, Africans and South Asians. They came to find a cheap bed, to trade, to deal drugs, and to flee from the spying eyes of the Hong Kong government. Each night several hundred people slept in rooms as small as a shoe box. Some had no bathrooms. The ones that did had the toilet and sink directly under the shower so you could essentially shower, shave and shit at the same time.

One of those guests, Julia was a British singer who performed at Club Maze on the second floor. Another was a Glenda, a Filipina entertainer and call girl who got so much business from Sailors and tourists alike that she became a long-term guest.

Julia saw how badly the mother was been treated by her husband and offered to help.

“When he started getting violent, we escaped to a friend’s flat across the street, but he soon found us. So now he’s wisened up and have taken my passport and hid it.”

“Yes, he did. He sliced my arm with a knife and he locked us up in a guest room for the weekend and turned off the electricity.”

“He’s no different than the pimps who hold the Indian prostitutes against their will here. We need to get you and your kids out of here before something happens to all of you.”

“Shall I get one of those illegal passports from the second floor?”

“No, go apply for another one at the British Consulate,” Julia insisted. “Just tell them you lost your current one.”

“I will need a British citizen to co-sign,” she added. “To make sure I wasn’t doing anything illicit.”

“No problem, I would be happy to vouch for you. I hope they don’t ask to speak to your husband.”

The interview at the British Consulate went as well as hoped for. Within a few weeks, the passport came in the mail. Thankfully, the husband was too busy with his comings and goings to notice.

When the passport arrived, Glenda mentioned that she knew an American man who was building a yacht at the Choy Lee Shipyard. He wanted to sail around Southeast Asia and was looking for a crew member to help clean and cook.

“I will introduce you to him,” she said. “He is your ticket out of Chung King and the evil grips of your menacing husband.”

The plan seemed daring, but now was the time to make the bold escape. We had to try, this could be our last chance.

Benihana
Prayers for Nepal
The Walls Came Tumbling Down