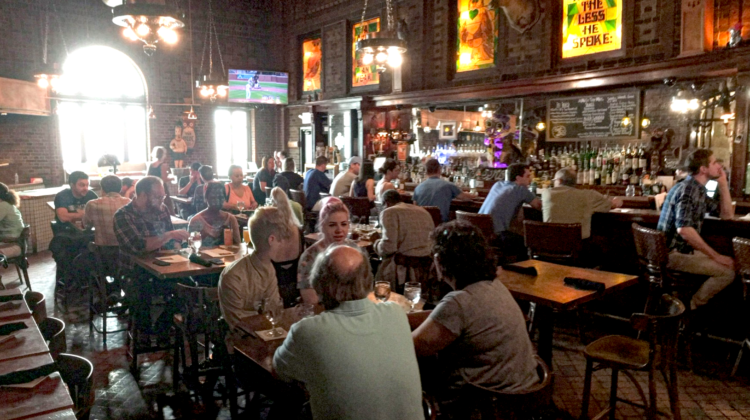 Every October, Baltimore would host a camp and in that same year, it was held at the Baltimore University near the Penn Station. The events were organized by Daniel Schiavone of Snake Hill (not the tavern but the web agency).

Just like in DC, after a full day of sessions, we would mosey over to a nearby pub which happened to be the world famous Owl Bar in the grandiose Belvedere Hotel.

The Owl Bar was built in 1903 and became an instant hit with locals. But when prohibition started, the owners improvised. They installed plastic owls on top of the cash registers. If the owls eyes were blinking, the taps were free to flow. This meant that the shipment had been received, and the police were nowhere to be found. If the eyes were fixed, then the taps were secured and you shouldn’t mention alcohol.

I ordered a Sidecar (brandy, lemon juice, and Cointreau with a sugar rim) and duck tacos. The food was quite bland and the cocktail was nothing to wrong home about, but I came for the nostalgia, not for the nourishment.

The pub is teeming with history. Some folks spoke lots, some just heard. It’s a great place for friends to get together and strangers to become friends. And once again, there was a lot of side topics been discussed and coding debugged over a pint of Natty Boh.

“So how did you learn Drupal,” Daniel asked.

“I have no programming experience. Everything I know, I learned from Google and YouTube,” I responded.

“Yes, the value of degrees and experience erodes when you can watch a YouTube video and ‘voila’, you’re now an expert.”

“I’m still very much a newbie. That’s why we need experts like you Daniel to make our sites smart, sleek and professional.”