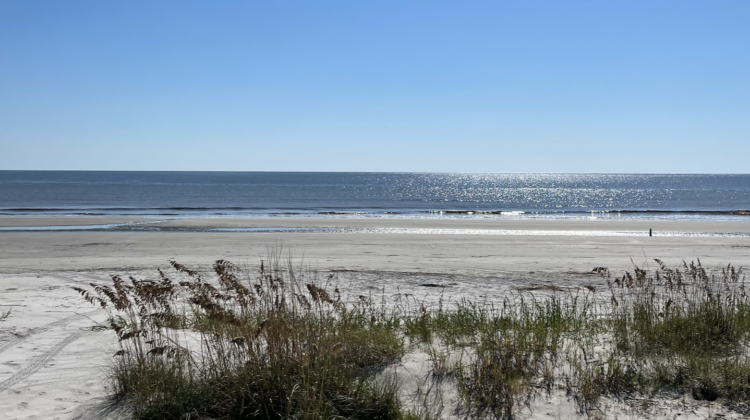 Mom & Colin visited Sapelo Island, a 30 minutes ferry ride from Meridian. You can go fishing and crabbing and ride horses on the beach.

Sapelo Island is the site of the historic Hog Hammock Community, also known as Hogg Hummock. Some historians believe Hog Hammock is one of the last intact island-based Gullah-Geechee communities in America.

The Gullah-Geechee are descendants of enslaved West African people who worked on coastal plantations from North Carolina to northern Florida.

I am fascinated by the linguistics of Gullah and Creole, as well as how some Gullahs escaped slavery, taming the Florida wilderness to become Black Seminoles. It was great that the Low Country was ideal land to harvest rice, just as the Africans did in Sierra Leone, but the colonists fell sick to malaria and yellow fever which spread quickly in the rice fields, while the Gullahs were more immuned.

What was also neat was the folklore tales that were derived from the rich immigrant cultures of the Gullahs.  And as new generations of slaves were born in the plantations, their children grew up speaking Gullah as their native language.  Gullah became a Creole language which is one that combines words and grammar from a combination of different languages. (When I was in Haiti in March, I was taught some Creole words so that I could get around).  Meanwhile the  planters learned Gullah so that they could communicate with their workers.  Both farmers and planters often learned Gullah as children from their  household servants.  These servants also told them Gullah folktales which also exist today.

For a long time, in the early 20th century, many people dismissed the Gullah language as simply “bad English.”  It wasn’t until 1930, when Lorenzo Dow Turner, an English professor turned linguist, realized that the Gullah language derived from 32 different African languages. Dr Turner’s work was amazing, and it was simply amazing that it took linguists that long to figure out the connection.

People come and go.  Some Cultures even go through change.  But language must never be lost, or else we’ll lose our identity and our will to live.

Today, the Gullahs still form a strong, cohesive community in Sapelo and the Low Country.   We hope this continues and both the language and culture is retained throughout future generations.  There is more to learn, more to feature, and more to uphold.
Today, there is an enduring kinship between the Gullah people and the people of Sierra Leone.  I thank them both for their contributions, hardship and commitment to maintaining their cultures through the years.

Sweetgrass basket-weaving is a tradition in the Low Country and throughout the Gullah Geechee Cultural Heritage Corridor. Gullah Geechee dash cooks will cook seasoned hush puppies, Low Country boil with shrimp and crab fresh from the sea with andouille sausage and red Carolina rice.

The tour also included the Sapelo Lighthouse, which once guided tall-sail timber ships in and out of Doboy Sound en route to Darien, the one-time timber capital of the Atlantic coast.

The tour also covered the Civil War cannon emplacement near the lighthouse with tales of Union and Confederate ships and blockade runners vying to reach the port of Darien.

Charles Lindberg landed his Spirit of St. Louis here, and the modern science of ecology took root right in Sapelo where the University of Georgia carries on its world-class environmental research focused on the unique role of coastal marshlands.