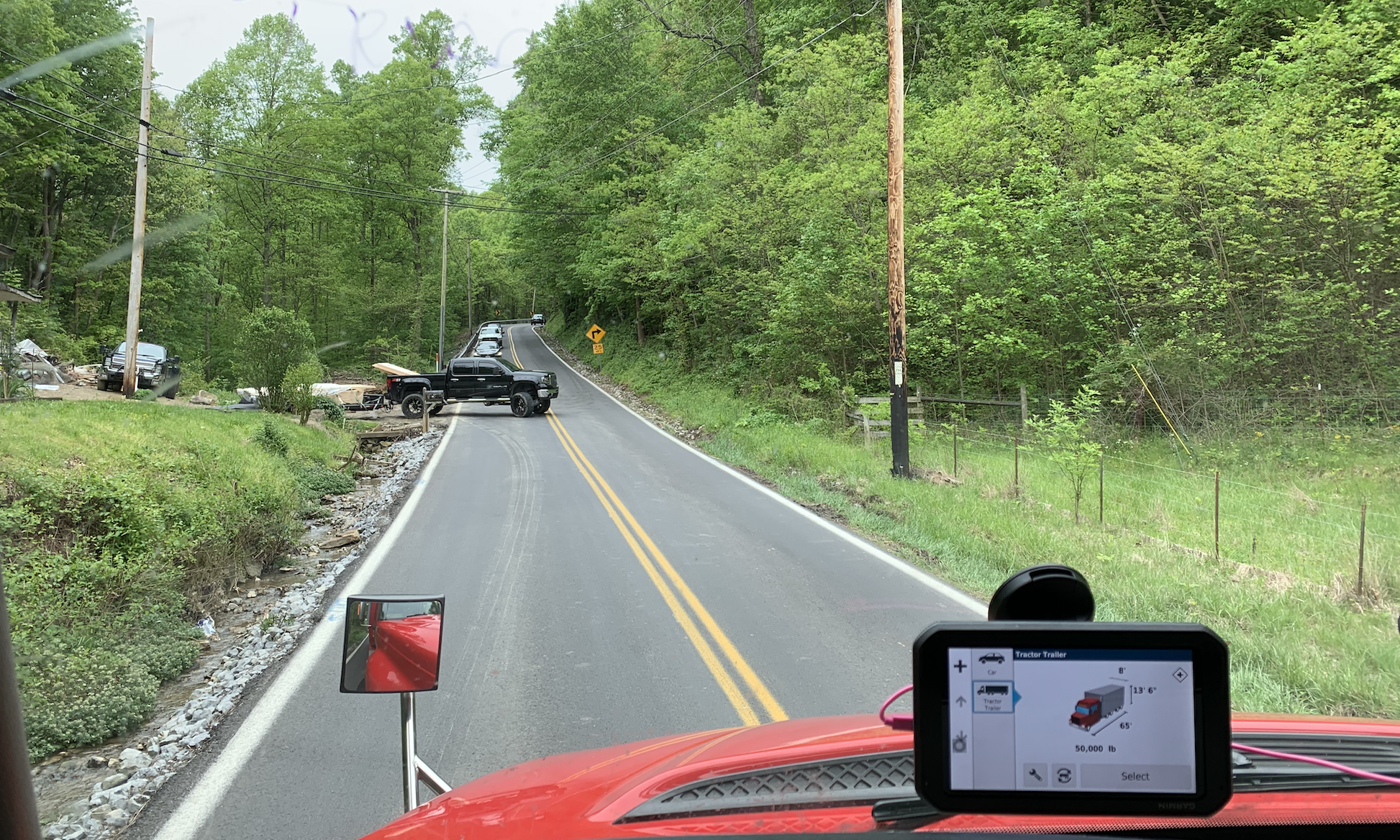 I-81 follows the spine of the Appalachian Mountains like a slipped rib. The drive in some stretches can be challenging to some and down right frustrating to others.

“Heck, it’s not all that bad,” says some truckers. I’ll take 81 over 95 any day. Hills are better than crazy suburbia drivers in their SUVS and luxury sports cars, ” I heard.

If you don’t start the hills with a full tank of fuel, you can easily run low before things finally level out. That’s because hauling a heavy load up treacherous Tenn hills can consume more fuel than you can ever imagine.

The first day driving on I-81 was stressful but smooth.  I managed going up and down, down and up with steady speed and without any hiccups. Heck I might even have to drive through the night – all the truck stops were filled to the rim. Then near Bristol, out of nowhere, an LED sign for Walmart towered over the freeway – a welcomed respite for the night.

Woke up first thing and ready to roll. There’s a tough stretch on 81 where there’s not a single truck stop, perhaps 60 miles at best. That’s the situation I was in – low on fuel and feeling a stroke of desperation creep in. My meter read empty with the dreaded low fuel warning light and I had 30 miles to carry before a Pilot or TA came into view. My GPS indicated that there was a Marathon Gas station within 10 miles – a safer option, I thought. I called them to see if they could fit a big rig — they applied in the affirmative, but I know they rolled their eyes with sarcasm.

I pulled off the interstate. Why couldn’t the gas station be right there. The Marathon was a good two miles instead and my heart began to race. My fickle GPS led me to a steep, windy road and I already started to dread the obstacle ahead.

My little red engine mustering all the power it could  had a difficult time climbing this ridge. All of a sudden, my 80,000 lbs rig came to a dead halt. Was my clutch slipping? Did I have a worn throwout bearing? Every time I tried to start the truck on 1st or 2nd gear, it would start to slide back and dangerously roll off the road into the looming ditch. In order to prevent this from happening, I had to slide into the next lane so now I was blocking traffic from both sides. Nobody was a happy camper, and I was none for the worse for their demeanor.

By now I had called a wrecker and already could envision the bill of at least $500 to pull me over the knoll.

Then seemingly out of nowhere, a barrel chested roughneck with a red, white and blue bandanna over his head stood by my door.

“What’s the matter. You need help?”

I nodded desperately, hoping he knew how to drive a 10 speed.

“Alright lemme park my ram and I’ll be right back.”

It seemed like time had stood still, but before I knew it, he was getting into the cab.

“I’ve been driving these hills for over 30 years. I know them like the back of my hand. Now slide over.”

I happily slid into co-pilot, praying God would lift me off these hills.

Thankfully this Guardian Angel had the key — his secret was to lock both the differential and inter-axle on my dash. He then started the truck in 2nd and slowly let his foot off the brakes like an adept pianist and with precision the truck started rolling in gear up and I could hear the little red engine chugging along.

I thanked my trucker angel profusely and paid him a nominal tip. He was glad to help and jumped off the rig while the truck was still in gear. Then I maneuvered the truck to Marathon Gas and Munchies Country Store like an attentive apprentice, thankful that I was no longer stuck on the long and winding road.

While fueling, I noticed that my front drive tire was flat. The tire was completely out of air and the bead was broken from the rim. I was glad to have discovered it, and if it wasn’t for running low on fuel, might have gone another 300 miles on the flat – not a good thing in the Tennessee hills. I quickly inflated the flat but the tire wasn’t holding air and would have to inflate it again at the next stop.

After fueling up, I was happy to get anything down my stomach. Ordered fried fish, fried eggs, fried taters and grits. It was warm and wholesome. Best of all, I could actually sit down, take my time and enjoy. After getting stuck on the hill and stopping traffic, I think I deserved a breather.