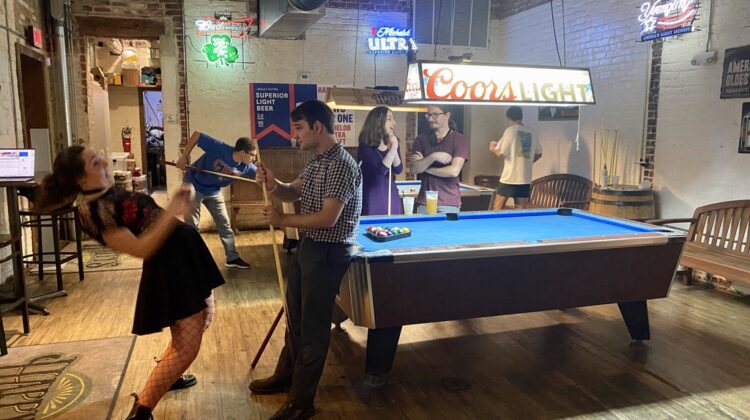 I’ve passed by Baton Rouge many times, but have never stopped. Today, since my delivery date got pushed back till Tuesday, I decided to give BR a try. I parked at the LA-1 South Truck Stop and caught a uber to the USS Kidd Navy Museum.

After visiting the state capitol grounds, I went on a hunt for three things: amazing happy hour specials, place to watch the Mavs/Clippers game and a lively crowd. Why not, since it was Friday night and covid is in our rear view mirror.

I ordered an Abita from Jessica then went out to the courtyard to get some fresh air.

All of a sudden a half-full beer cup went flying and landed next to my feet.

I looked to my left, and a nice couple who were enjoying a night out apologized profusely. I quickly stated that I fine, and it was only beer.

“So are you guys from here?” I asked, hoping to get some recommendations about places to visit.

The couple introduced themselves as Landon and Victoria.

“We can’t give you any recommendations. We just moved here last week from Virginia,” Victoria replied.

That was the ice breaker, and we easily struck up a conversation about the State Capitol building, Gov. Huey P. Long and emergence of programming jobs to the city, which brought them 12 hours SW from Wytheville, VA.

“The State Capitol building is often regarded as a monument to Gov Long. a progressive politician who split from FDR’s New Deal and established the Share a Wealth program,” I stated.

“Wow, the New Deal helped a lot of people recover the Depression. One of it’s key initiatives is the Tennessee River Valley, the largest public power company in the US,” mentioned Landon.

Landon is a theater actor who has extensive experience at the VA Repertory Theater, and we both lamented about how we missed Broadway and couldn’t wait until the shows return this fall.

“So what are you drinking? Landon asked.

“Abita Amber ale, ” I happily responded. “Wished I had some red beans and rice to go with it.”

“Well I used to work as a bartender and one day a guy walks in with a big smile and heavy pockets and ordered a pickleback for everyone,” Landon said. “Suffice it to say, everyone in the pub had a very good time.”

“Have you ever tried a pickleback?” Landon asked.

“I’ll be right back,” Landon added.

I had just finished being backstage manager for a country show at the theatre I was working at. I was introduced to picklebacks on my 21st birthday, so I ordered one for me and my friend. The bartender kinda shared some frustration with having to go to the kitchen for pickle juice, but she was just joking. We’re good friends. Then a regular comes over and sees us taking shots and decides to give it a try. The bartender goes back again, this time she left the pickles out front so she wouldn’t have to run anymore. The regular loved it so much, that he bought everyone in the bar a shot or two. They ran out of pickle juice that day, and ever since then they have to buy gallons of pickle juice because they run through it so quickly.

And just like with Landon’s story, the picklebacks were a huge attraction with the bar scene.

Soon, two others, Alex and Lauren joined us and for more shots.

Happy’s allow you to bring your pet to the bar. We saw a few dogs – a Boxer and a Rottweiler. A frequent customer outdid Fido by bringing Felix a sociable and friendly short-haired feline. This did the trick, cuz, this attracted a lot of gawkers and admirers.

There was also a wedding party dancing and celebrating in the courtyard, and rain wouldn’t deter them. There would be more pickleback shots, so leave the pickle juice out front – it would be a very happy night.

And at the LA-1 South parking across the Mississippi River, I would be sleeping soundly tonight.