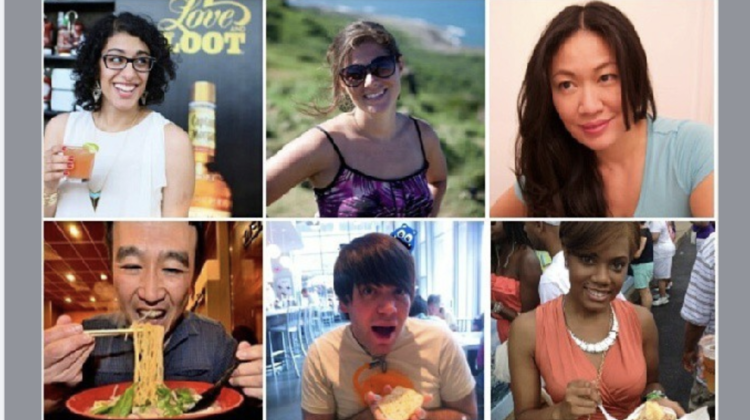 In 2013, Dishcrawl stormed into town giving RUNINOut a run for the money.  During their events, food lovers gather together and visit several restaurants themed around a type of food or neighborhood.  It’s a fun way to discover different restaurants, meet new people and enjoy some amazing food.

On October 5, 2013, Dishcrawl held the world’s largest one-day chef competition called Battledish where foodies and the general public sampled food from six different restaurants and chose their favorite dish.  Events were held on Saturday in major cities from coast-to-coast such as Seattle, New Orleans, D.C., and San Francisco.

Qui-Juan Jones, the local coordinator asked me if I wanted to be a judge — he didn’t have to wait long for an answer. I was honored to be amongst a cast of scraggly bloggers and was looking forward to strolling up and down U Street sucking on grilled diver scallops from The Tap & Parlour, nibbling on buttermilk fried chicken from DC 9, and chewing on charred octopus from Ulah Bistro.

DC-9 is a nightclub that hosted DC’s top go-go musicians from Chuck Brown to the Young Senators. Wayne Manigo is a huge fan of D.C.’s homegrown funk.  In the early 70s, Chuck Brown laid the ground work for a new music inspired by funk, blues, soul and salsa and D.C. was where this groundbreaking genre was born.

“Yeah, the go-go music has made a huge impact in my life and my career in comedy. There were many nights I would stay out late at DC-9, but the beat was so infectious, it carried me through all during the week.”

Wayne was also interested in hearing about the Battledish competition.

“I have a lot of respect for the chefs that pour their blood, sweat and tears on U Street — it’s hard to run a restaurant on these tough streets.”

I took a sip of my Absolute ruby red peach liquer which was sweet but not strong enough. “Yes, running a business is a huge challenge here — it’s where many restaurants barely survive and die.”

Wayne took a bite of my hush puppies and nodded in approval.

“Down the road, in DC Central Kitchens, Chefs Jerald Thomas and Marianne trained me. I owe a debt of gratitude to these master chefs. Because of them, I’m no longer a starving artist.”

After Ulah was announced the winner, and everyone was stuffed and had a fabulous time, I thanked Qui-Juan for the priceless opportunity to serve as a judge.

“We should host an event together next time. Same format, same number of restaurants, just sans the judging.”

“That’ll be great. Just networking eating and drinking. Where are you thinking?”

“We haven’t done many events in Virginia. Can we find a walkable place with a lively nightlife, lots of young people and diverse restaurants?

Tucked away just north of Arlington and west of Rosslyn, Clarendon used to be a sleepy town, straddling the line between city and suburb.  In 2009, the Washington Post described Clarendon as “the hippest spot north of Richmond and south of the Potomac1

It was Saturday, August 9, 2014, and a couple hundred people showed up for Clarendon’s first Food Crawl.

Here’s excerpts from the blog written by Annamaria for RUNINDC

What a treat! You simply can’t beat five lovely restaurants in the heart of Arlington for only $40 per person. A play on those fun Pub Crawls that seems to be happening everywhere these days, the Clarendon Food Crawl, took lucky participants on a culinary tour of Ireland, Italy, Mexico & El Salvador, the Mediterranean, and Asia. Hosted by RUNINOut and Social Group DC, it was well worth the time and money spent.

The group started at Ri Ra Irish Pub.  The decor was amazing as it was built from authentic Irish Salvage materials some dating back over 100 years.

We started with the potato and leek soup with potato croutons and served with brown soda bread. This paired nicely with an Irish Mac & cheese with toasted bread crumbs with Irish cheddar.

We were served an excellent fish and chips, prepared by Mike Grasso, accompanied by tartar sauce, a slice of lemon, and malted vinegar as is traditional in Ireland.  The cod was cooked perfectly, flaky and wonderfully moist, inside with a nice thick beer batter and hand-cut chips. To top it off, we enjoyed a Guinness sundae Guinness draft on vanilla ice cream with Jameson whipped creme

Next, we traveled next door to Clarendon’s little slice of Italy at Faccia Luna. We were greeted with a huge buffet-style meal of pizza (pepperoni, cheese, and veggies) and salad.

This is Judy Castagna’s first event with RUNINOut and was referred by her friend Jason “Foodgeek” of DCFüd.

“The crust was thin, but not too thin and it has great flavor. The sauce was tangy and garlicky, and the pepperoni was the perfect addition,” said Judy.

I was pleased to find they didn’t cook their pizzas to the point of being crackers as some places do. The Italian salad was an excellent complement to the pizza, and the accompanying choices of Balsamic Vinaigrette and Ranch went well with the iceberg, radicchio, mushrooms, and shredded mozzarella. Like Ri Ra, Faccia Luna’s decor was classy and gorgeous and definitely worth visiting.  The restaurant has been a mainstay of Clarendon since 1992.

The third stop on our trip through the various nationalities of food along Washington St. was Mexicali Blues which boasted the largest patio seating on the block and its own charms such as the Coronita, an original mixture of a margarita served with a Corona held upside down inside the ‘rita.

Basically, as you drank the margarita the corona replaced the missing liquid. On the inside, the restaurant boasted plenty of seating as well. This was most assuredly a great place for large get-togethers and events. The decor was a good mix of traditional Hispanic colors, paintings, and artifacts such as a bull head mounted in the corner, pottery, and day of the dead painted skulls. Each person got a plate of the Yucca con Chicharron. The yucca which is a plant native to Central and South America was lightly fried but not well seasoned in my opinion.

The yucca root had a taste and texture similar to potato yet marginally sweeter. It was cooked to a nice doneness where the skin was refreshingly crisp and the inside still soft. Naturally, it is very mild and I felt a touch of salt would not have hurt this side dish. My fellow table-mate at this event said traditionally he thought it was caramelized a bit more but not salted. That would have worked also in improving the tame taste of yucca. What did save the side dish was the outstanding horseradish sauce. I cannot say just how much I love horseradish, I swear I could eat it raw. For those not quite so fond of this root don’t despair, Mexicali Blues’ offering is light enough to please any palate. The cabbage salad that came with our small plate was lovely, crunchy, and spicy but not overly hot. Lastly, the Chicharron was less than optimal. The flavor was spot on, savory with plenty of spices blended in the sauce it is simmered in. The pork however was simply over-cooked which is a shame because there is almost nothing as good as a succulent bite of pork. I can’t write this place off entirely based just on the food sample and am planning on a return trip at some point if for no other reason than to get a Coronita.

At Spice, the fourth restaurant on our list, we were served family-style – one huge platter per table. Located right across the street from Mexicali Blues, this minimalist deli-style corner spot had limited indoor seating but their shaded patio was airy and spacious. For our meal, there was a choice of roasted chicken or salmon served on extra-long grain rice, with sides of potato or carrots, and salad. The roasted chicken had a good full flavor with just enough lemon and olive oil. The salmon dish was cooked with its combination of herbs and olive oil was absolutely deliciously infused into the delicate flesh of the salmon.

Yasser Mohammed opened Spice to showcase his wife, Rahma’s amazing cooking. “We want to keep the quality high.  Each day we cook small portions in order to keep every dish fresh.”

The lamb was marinated for 24 hours.  The Amoroso Hoagie rolls delivered from Philadelphia were made with 680-day-old prosciutto, imported from Parma, Italy.  The chicken was grilled with seven different spices.

With Yasser’s eye for these fine details and Rahma’s natural flair for cooking, Spice offered an authentic Mediterranean menu in a beautiful, colorful setting.

The final big blow-out was at Hunan One next door. The inside was enormous with ample bar seating, plenty of booths, tables, and bar-stool islands near the windows that accommodated groups of all sizes. Starting with the bar they had a good list of beers and wines presented at nice discounts for our group. We got half off wine bottles, pints at $5.50, and $4.75 rail drinks. I split a bottle of a lovely White Zinfandel with Angela which went well with our samples. As was my tradition, I tried the hot sauce first. It was a spicy chili sauce that delivered a medium-hot level of heat but didn’t kick me in the mouth.

The spring rolls were light, fresh, and delicious and the chicken and beef satays were marinated with spices and served with peanut sauce.

My only real letdown was the crab rangoon which was a little toothsome and seemed as though it had come from a frozen bag instead of being freshly made. Also, it was overly sweet causing me to wonder how exactly they got it that sweet. Finally, the chicken wings were exceptionally seasoned with five-spice and were delectable! A thin layer of crust on the outside and perfectly done and juicy on the inside, they make my list of dishes to return and have more of in the future.

On the whole, the Clarendon Food Crawl was a big success. The tour explored both familiar and new, agreeable experiences. Friends were made, good food and libations imbibed and we finally had our first food crawl in our belt.

1 Amanda Abrams, Clarendon: Happily Straddling the Line Between City and Suburb, DC.urbanturf.com, May 11, 2010