Jakita wanted some crab. She told me this when we were changing out tires at the North American Trade Schools. Something ’bout tires made her crave for seafood. But we mustn’t be distracted. Safety is a priority and we first ensured the truck was properly chocked. Then it’s important to position the jack underneath the differential or pumpkin. This can be done because the differential which sits in the middle of the rear axle carries the full weight of the truck.

We then connected the air to the jack and raised her up into the air. Then we hooked up the impact wrench with 150 psi high pressure air and removed all eight lug nuts.

Then we removed the entire wheel off the hub. Steers (front) were a breeze but tires could be a Son of a B * * * *

Then we removed the valve stem so the tire would start to deflate. Then using generous swipes of petroleum jelly some playfully called KY Jelly, separated the tire from the rim.

The goal of the lubricant is to reduce friction between the rubber tire bead and the metal rim flange allowing the surfaces to slide over each other easily.

“Could sure use some Crabs about now,” mused Jakira.

“What kind: Dungeness, Chesapeake Blue, Snow crab?”I snapped with a tone of sarcasm.

“There’s only one kind of crab that matters in B-town, and that’s the one caught in the traps and nets in the Patapsco or the Bay.”

“Perhaps, but that’s not the only tasty seafood that comes out of the Bay – there’s oysters, clam and rockfish, to name a few.”

“Well that don’t impress me much.”

So I laid down my impact wrench and lathered my hands at the wash fountain. Then I made a phone call, my face still with a thick coat of grease.

“Half a dozen male, half a dozen female – jumbo and steamed,” I requested.

When the bell rang, I rushed into my Baja, Jakita riding along.

I made sure I covered both seats because our pants were stained with oil and lubricant. Now it was time to get messy with crab juices.

Crab Crib was only a hop, skip and a jump from the trade school.

As usual, there was quite a line, so I was glad I called ahead.

The staff is so friendly here. They were pleasant with the customers which definitely made waiting well worth it.

They were quick and efficient and we were back at the school before the bell rang again.

Jakita lined the shop table with yesterday’s Baltimore Sun, then sprinkled a bucket of Old Bay all over the spongy meat. Old Bay, is a blend of every eye-tearing spice you could round up from Auntie’s kitchen cupboard.

I prefer mine with just pepper and butter, but Jakita like most native Baltimoreans was a “cayenne pepper” spice girl.

Crab to me tastes like a soft, squishy white meat that resembles fish or the lean part of the chicken. But to Jakita it was like morsels from heaven.

By the time we got done sucking up the steamed cetaceans, it was time to clean up those crab shells and get our hands dirty again with tire lube.

Now that the tires were removed from the rim, we had to mount new tires, then roll them to the tire inflation cage to inflate.

And once we got all 10 tires changed on the tractor, Jakita found dreams of Chesapeake Blue once again. 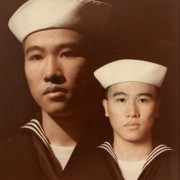