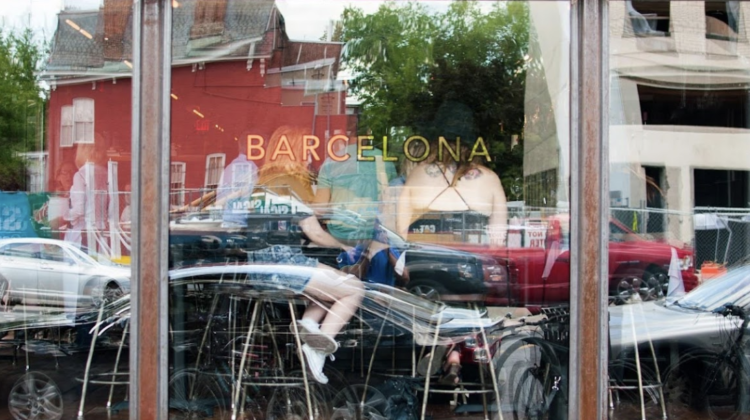 From the corner of my eye, I saw her. She looked Vietnamese but then she looked half Caucasian. She had short brown hair with golden highlights and matching horned rim glasses. Dressed in a casual pink tank top and a pair of worn-out jeans, she seemed to be enjoying her Banh Mi. It was topped with carrots, jalapeños and cilantro and I noticed she had soaked the lemongrass pork with a healthy dose of Sriracha sauce.

I ordered a Singha beer and some crispy spring rolls and introduced myself.

“Christine,” she said as she wiped her hand on a napkin and reached to shake mine.

“Beautiful day for a Banhi Mi, isn’t it?” I asked.

“From time to time, but I’m pretty skilled in the kitchen.”

“Everything but I prefer fish. And I’m partial to the cuisine of my home country.”

“Tender and bursting with flavors, but I’d rather have a lemongrass margarita.”

14th Street NW DC has changed drastically over the years.  The former riot-scarred boulevard has now turned into a booming hipster mecca.

Whole Foods opened in 2000 anchoring redevelopment on Logan Circle. Cafe Saint-Ex opened in 2003 introducing the Farm-to-Table concept to the corridor. Then Busboys and Poets in 2005 and Marvin in 2007. When Le Diplomate opened in 2013, restaurateur Stephen Starr brought Paris to 14th Street.  Barcelona Wine Bar followed later that year, bringing the taste and culture of Spain to DC.

The ambience was very intimate and elegant.  There wasn’t much for decor, but with the atmosphere and energy, I felt we were transported to a gastropub in Las Ramblas, Barcelona’s famous promenade.

“I love Spanish cuisine and influences,” Christine said. “I saw a lot of Mediterranean revival architecture when I visiting San Antonio.”

Christine opted for the Earth First Crianza made from organic grapes, full of rich red fruit and violet notes.  She loved the idea of drinking wines that were environmentally friendly and tasted very clean. I opted for the DC Brau followed by a sangria spiked with peach brandy and even got a taste of Christine’s Crianza.  We were still full from the banh mi and spring rolls from Four Sisters, so we shared three plates of tapas: salmon crude, hangar steak and patatas bravas.  The cut was sizzled medium rare, and the patatas was a nice accompaniment to the juicy steak.  All the plates came in sizable portions and very simply divine.

“Only when I’m having fun.”

“The feeling is mutual. You should come to more of our events. There’s always good food.”

“That’s great but it’s the people who I love the most. Food is just my preferred method of reaching them.”

“Yes, my former boss, Admiral Robinson said that medicine is the universal language. But I agree, food is also.”

“Will there be more drinking.”

“Of course, booze flows at our events like the Potomac at Great Falls.”

“How often do you host events?”

“Two to three times a month, depending on our clients.”

“Is that mostly what you do?”

“Actually the website is our bread and butter. It’s our product and content and how we make money. We’re only hosting events because it’s the means to the end.”