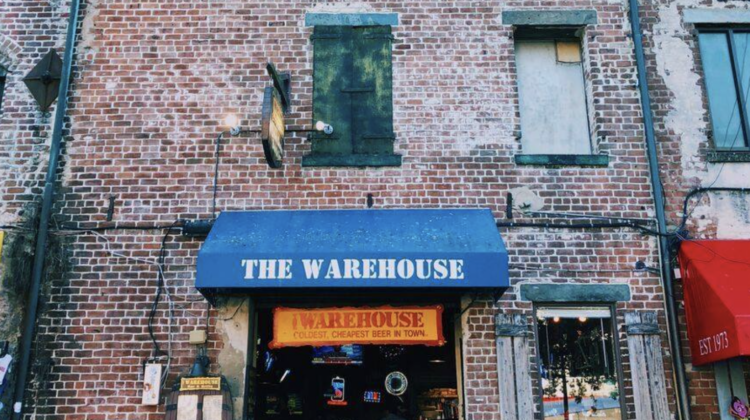 Savannah has an amazing World War II memorial aptly titled “A World Apart.” The bronze and copper globe is split in two, a symbol of the division between the European and Pacific theaters. The names of the 527 Chatham county service members killed in action are inscribed on the monument’s walls.

River Street located on the bottom of a bluff was an old Indian burial ground. Many of the buildings which line River Street were once warehouses used to store cotton before it was loaded onto ocean-going vessels.  Cotton and other goods were crammed into ships by men working under extreme and dangerous conditions.  Occasionally, a worker would be crushed under the heavy loads or men would fall off the docks and drown.  With hundreds of deaths over the years, the conditions were ripe for a haunting.   Locals and visitors have reported seeing ghostly men, dressed in 17th century style clothing, moving through the shadows of River Street.

We visited one of these warehouses, now a favorite watering hole.  Warehouse Bar & Grill, no doubt gets regular phantom visitors, but today, it was packed with party-goers.

There was a local singer belting out country rap.  The beer was cold and cheap, and it flowed freely and the patrons seemed friendly.  There was a table full of women, but only one was the lucky birthday girl.  And if you played it right, you could buy her a shot of Jose Cuervo and hope to get a dance or grind.

Outside a riverboat motors out for a twilight dinner cruise and a ghost and gravestones tour bus roars by, filled with eager sightseers.   They stop in front of the Warehouse and the narrator goes on a long tale about a recent sighting.

I bought Keith and Steve a shot as well as one for the birthday girl who was happy to return a hug.

“Who are your friends?” I asked.

“What, I don’t know them. I just showed up a few hours ago, told them it was my birthday and we haven’t stopped partying since.”

What a way to get free drinks, and I was happy to oblige.

There’s usually a long wait to order. You have to show your ID and I advise ordering from the list which is updated weekly

KPort
Beer, Bourbon & BBQ
Traveling is in my Blood