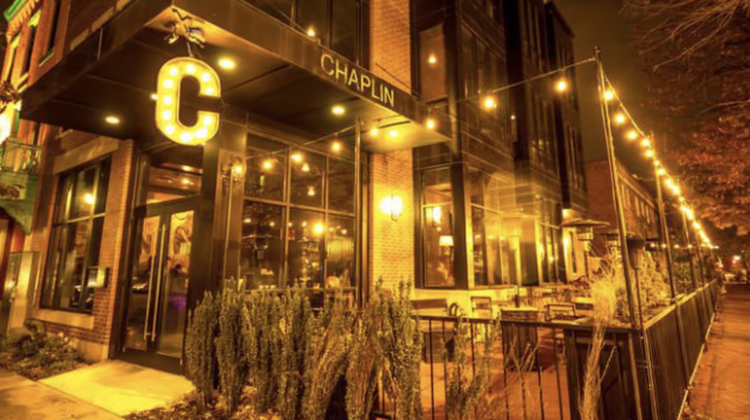 Sarah Berghoff was out with friends and wanted to visit a brand new spot in Shaw for cocktails and Asian-inspired cuisine. Upon entry, a 1920’s style mural with an icon of Charlie Chaplin came into view. The space was elegant with a speakeasy vibe. On the wall above the bar, The Tramp played on a reel.

A tall, burly man with a big smile came over and greeted them.

“What does Charlie Chaplin have to do with Ramen?” Sarah inquired.

“Well, the legendary silent film star was adored in Japan. That’s because he could make people laugh without uttering a word.”

“What a charming connection,” Sarah said. “What do you recommend?”

Several minutes after Sarah and her friends sat down, the bartender with a cool Chaplin-style outfit served them their classy cocktails.

Armin came by again to see what they thought of the innovative cocktail menu.

“Fabulous,” Sarah said. “I can see you have broad experience in this industry.”

“Yes, I’ve worked in this business for over 20 years. At the Capitol City Brewery and most recently at the Saint Arnold’s Mussel Bar.”

“Amazing you’re a powerful force in the restaurant industry.”

The next day I got a call from Armin.

“So Sarah speaks highly of you. I thought I was the Big Man on Campus.”

“You’re a rockstar, Armin. All I do is promote restaurants and host some events. You’re the brains behind your brand and do all the heavy lifting.”

“Well we sure could use some help with marketing and developing our web presence.  When we opened a few months ago, we were named The Chaplin. Now his estate is threatening a lawsuit so we changed it Chaplin’s”

“I can help with the name change and ensure that your website and social media reflects the new and improved branding.”

The following week, I met with Armin and his co-owners, brothers Ari and Micah Wilder as they gave me a spirited tour of their cozy space.

The vibe and ambience was warm and welcoming and the Laughing Gas cocktail I ordered was potent and bursting with flavors.

“We figured out a way to compress carbon dioxide with helium,” said Micah. “You’re gonna sound really funny and everyone’s gonna be laughing at you.”

I also met Chef Myo Htun, a native of Burma who cooked under a Master Ramen Chef in Tokyo for 30 years.

“Chef Myo is a tireless worker,” Armin said. “He’s worked everyday since we’ve opened. We should make him a co-owner one day.”

Chef Myo served me the Tonkotsu Ramen with the broth made from boiling pork neck bones – the collagen in the connective tissue transformed into gelatin, which gave the broth its silky texture. Inside the bowl was melt-in-your-mouth chasu pork belly and soft boiled eggs enhanced by its custardy egg yolk.

“Your ramen kicks Ass, Armin. I would love to host our next get-together here and invite all Ramen enthusiasts to celebrate the hottest, new setting in Shaw.”

The next month, dozens of ramen and cocktail afficiondos converged at the downstairs bar for a private event.

“This is what happens when a couple of bartenders open up a restaurant,” Micah declared. “We definitely know how to lighten up the menu.”

As each guest arrived, I greeted them individually: Kanita the attorney, Darrin the realtor, Todd, the Congressional staffer and Sarah, the ER physician.

“Exhausting but strong. I cared for a lot of sick patients today, and hope and pray everyone is on the mend.”

“I’m so thankful for what you do. You’re such an amazing person. Lemme get you a dumpling.”

I returned with a steamed shrimp dumpling on a whiskey sour and a sparkling new business card.

Sarah liked the Running Orangutan logo popping on a yellow background. But when she turned it over, she nearly flipped out.

“Whoa, you put my picture on the back!!”

“Well you said you wanted to see the picture of us at Toro Toro.”

“But not on your business card.”

“But, your face is more interesting than mine,” I explained. “No worries, you’re not the only one — I also put Kanita and Jackie on there, too.”

“Well, I’m honored to be promoting your website,” she replied in jest.

“And I’m honored to have you serve as our de facto brand ambassador. After all, you introduced me to Armin and Chaplin’s.”

Armin later told me that he and his partners have more plans for Chaplin’s and the continually changing neighborhood.

“Perhaps adding a sushi joint next door or building an American diner across the street.”

“Would it be another Hollywood-inspired name?”

“Yes, Shawshank Diner comes to mind–one of the best movies ever made..”

“And Shaw is one of the city’s hippest up-and-coming neighborhood,” I said.

“Indeed, my beloved community is still very much on the move,” he replied.

“I’ll drink to that — another round of yummy shooters, please.”