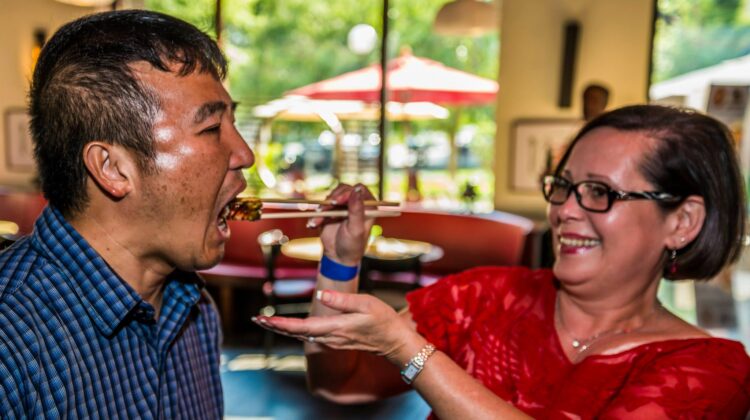 It used to be part of the Tara Thai chain. But with a new owner, top-to-bottom remodeling and zen-Buddhist sculptures flanking the entrance, the name naturally morphed to Tara Temple. If D.C. was the banquet hall, Arlington was the backyard. It was a once-sleepy hollow where I had the least amount of clients and the fewest number of events. So when manager Shine Chuenyam invited me to host a bash at the Temple, I jumped on the opportunity to spread my reach.

When I approached, I was met by two mythical stone lions standing guard at an ironclad double door. As I walked in, I could see that the foyer was shaped like the entrance of a Thai temple with shiny red columns and a sweeping temple roof.

I was greeted by stone statues of Buddhist deities praying. And also familiar faces — comedian, Wayne Manigo and personal trainer, Orlando Darden, my were already seated at the bar.

The Temple was spacious with a large oval-shaped bar, plenty of comfy couches and semi-circular booths for those who yearn for a bit more privacy. The decor was sleek and modern and it definitely set the tone for an evening of celebrations.

As I made my way around the bar, I noticed two lovely women with bronze skin tones and golden brown hair.

“Are you two sisters?”

A petite girl with a toothy smile donned in a yellow floral print dress pointed to her friend. “Roxy is — born and raised. I’m Deb from Chicago. I wanted to go for a run, and Runinout popped up on Facebook.”

“Great sports city. So you must love Mike Ditka and Michael Jordan?”

“Absolutely, and Roxy is a huge Redskins fan, so she loves RG3 and Joe Theismann. I’m a huge Blackhawks fan.”

“And home of the deep dish pizza — what your favorite type of food when you’re really hungry and you care who you’re eating out with?”

Deb nursed her martini with extra vermouth. “Hands down, Shee-car-go is the best. Love the wood-fired pizzas from Matchbox to go with the milkshakes from Ted’s Bulletin.”

Roxy took a gulp of her Singha.”The birria tacos from El Rey and the soy garlic wings and kimchi from Bonchon.”

“Sounds perfect. And I just love the 1920’s art deco setup at Ted’s and the shipping container design at El Rey.”

It was at that time that Wayne came by to steal the show.

“And for laughs, you should check out the Bier Baron Tavern and Comedy Loft.”

“Girls, this is Wayne our resident comic. He’s also my top promoter who will attest to the fact that on Runinout you can search for your favorite type of food, events, ambience, or even team sports, and the site will provide personalized recommendations in the local area.”

Roxy’s eyes lit up. “Really, can you search who is serving the wheat beer, Hell or High Watermelon?”

“The Cantina Marina at the Wharf,” I replied instantly, enjoying my role as a walking Google.

“Can you search for places that are pet friendly?” Deb requested.

I quickly tapped into my phone. “Wonderland Ballroom — do you own a rescue?”

“I have a terrier and I have my eyes set on a dalmation — heard they are beautiful and brainy.”

“Sweet. I have a pit bull named Georgia and a sun conure named Apollo — my parrot who likes to drink Guinness at the Irish Channel.”

Shortly after, Khoi Tran showed up. An Air Force officer stationed in the Pentagon, he is also a food connoisseur and loves to blog about his experiences.

“I love a Thai restaurant that serves good sushi,” he said. “Sushi that’s creative with a fine presentation.”

Shine Chuenyam brought out the next delicacy — the Sunomono Salad consisting of octopus, cuttlefish, cucumber, and seaweed over a bed of shredded white radish with sweet rice vinegar and sprinkled with sesame seeds.

For two hours, Shine kept putting out phenomenal appetizers like we were Thai royalty, and we were ordering $2.50 draft Kirin and Singhas like they were Poland Springs from the spring.

Orlando quickly showed off his chopstick precision skills by extracting a red cuttlefish out of the medley.

“Mmm, juicy and rich – it’s a cross between a squid and an octopus.”

Christine giggled then decided to bust out a one-liner herself. “So what did Sushi A say to Sushi B?”

Khoi smeared a line of wasabi onto his nigri. “Thank you Shine-san. This is almost as good as Sushi Taro in DC. But for Arlington’s standards, you’re fair to middlin.”

“Well our wasabi is potent and every bite will set your mouth on fire.” Shine grinned as he poured another round of tequila.

All the guys partook, sprinkling salt all over the counter and sucking lemon wedges as if they were adult pacifiers.

Orlando smiled then grimaced. “Wow that Don Julio really packs a punch. Now I’m ready to go in the ring.”

Wayne grabbed a tuna nigiri with precision and held it next to his mouth. “As for me, my lane is in the kitchen. Being a chef is hard work. But a sushi chef, all you gotta do is resist the temptation to not cook the food – how hard is that?”

Shine served an enticing plate of dragon roll. “Alright smart aleck, no more caviar for you.”

Wayne devoured the entire roll. “All joking aside, this sushi is out of this world. And the rice, you nailed it. It’s even better than my favorite spot on H Street, Sticky Rice.”

Since Khoi arrived a bit late, Christine was happy to feed him. Khoi was reluctant at first since as a military officer, he was used to fending for himself, but Christine wouldn’t take no for an answer.

“I’m a cook and feeding my friends is an act of love.”

“C’mon now, this isn’t omakase. Khoi can get his own damn unagi,” The Mezcal was making Wayne funnier by the minute.

I waited till Khoi finished chewing his nigiri. “So what do you do on your free time? Are you visiting a lot of different restaurants?”

“I wish I had time to do more. A lot of life doesn’t happen because I’m attending graduate school in International Relations — a lot of writing, poring over textbook chapters, and reflecting on feedback from professors and peers.”

Christine pulled the lobster tail out of the shell. “Yes, education is important, but so is making new friends. Why do you need to attend school, when you’ve got Runinout?”

I turned to her and said, “You need to come to our events more often. No one will ever complain that they didn’t get enough to eat.”

“And you two bozos,” as I looked over at Wayne and Orlando. “You guys can take it easy on the booze and sushi. Sometimes, they just don’t go together.”

Orlando took another bite of his sashimi. “Talk about hypocrisy — I haven’t seen you stop drinking except when you were chatting up with the girls.

“Yes, I really need to seriously cut back on my drinking. Both my physical and mental health has taken a back seat.”

Deb took a sip of her soju “Alcohol goes great with sushi, but sadly, it’s a depressant and keeps us at a lower vibration.”

“Well, how can I motivate myself to drink less?”

Deb bit into her sushi roll with avocado and crab meat “You could internally motivate yourself. Reward yourself for drinking less, by eating more great sushi.”