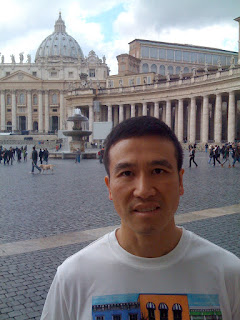 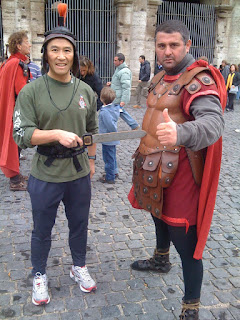 Only one word can describe what I laid eyes on today — no, not incredible: “Magnificus” Rome has shaped up to be by far the most beautiful European city I’ve visited this year–and this is my 4th trip to Europe since last Dec. And the Colosseum is just breathlessly amazing in it’s astronomical feat of engineering and even more amazing that it’s still around and in great shape after over 2000 years. Couldn’t believe what laid in front and all around me — the ancient city of Rome in all it’s grandeur and imagined in my minds eye Julius Caesar or King Augustus addressing the crowds in the Roman forum. Indeed my visit to ancient Rome and my run around the ruins of Palatino has been the highlight of my European vacation and has definitely been the most inspiring and uplifting. What is the lesson — that remains to be seem — but I know I can take what Rome has taught me (that if we dont learn from our mistakes, we are destined to repeat iit) for a very long time, if not a lifetime.
During my tour, I was amazed and saddened to hear about how the Christians were persecuted  in the hands of the authorities of the Roman Empire.  In fact thousands of Christians were martyred by Emperor Nero who blamed Christianity for the great fire of Rome.  Refusal to worship the Roman emperor was considered treasonous and punishable by execution.  Christians were tortured, burned, starved and even forced to gladiatorial contests to amuse spectators.
That was until Emperor Constantine was exposed to Christianity by his mother, Helena.  Constantine followed Christianity after experiencing a dramatic event at a battle when he looked up to the sun and saw a cross of light.  He would eventually claim the emperorship in the West. Off to Germany tomorrow after an inspiring morning run.