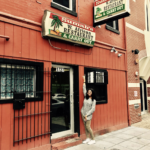 In the summer of 1990, a half dozen U.S. Navy 2nd class midshipmen from different parts of the U.S. were excited to be spending their summer in the Mediterranean. They would be embarking aboard USS Peterson (DD 969) which was scheduled to visit Italy, Spain, France, and Israel.  Then suddenly civil war broke out in Liberia and Peterson was called upon to make a … END_OF_DOCUMENT_TOKEN_TO_BE_REPLACED